Basenji are hypoallergenic dogs that have their origins in Central Africa – especially the regions around Congo and Southern Sudan. The Basenji dog are a hunting breed. They have a special characteristic: Basenjis don’t bark, they yodel. This is why they are popularly known as the “African barkless dogs”.

However, these hound dogs do make a wide range of sounds: Like other dogs, a Basenji can growl, howl, chortle, whimper and even scream if in pain. Their yodeling comes in a variety of unique sounds as well. That is how the dog breed are able to communicate various messages with their master while hunting in packs in the jungle.

They are an ancient dog breed that are thought to have appeared as a result of mating between wolves and coyotes (a yodel is one of the sounds that coyotes make). Their inability to bark is valued by African hunters since the dog does not scare away the prey.

The Basenji are medium-size hypoallergenic dogs whose male weigh up to about 10 kg. They can be as tall as 17 inches at the shoulders and have a tightly curled tail. This tail is high-set over its rump, and tapers at the end. In addition, a Basenji has erect ears and a wrinkled forehead. The dog has a life span of 12 – 14 years.

The Basenji dog is intelligent and friendly but sometimes Basenjis are mean and stubborn. They are also independent (this is crucial for their survival in the jungles of Africa), hence difficult to train. 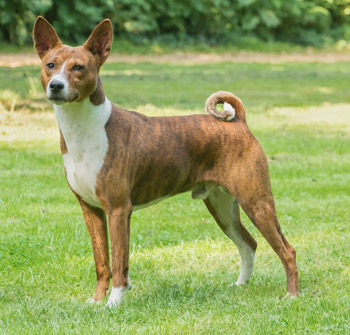 The following are top facts about the Basenji dog breed.

Do Basenji dogs smell?
No. A Basenji dog will have little or no smell. This is because the dogs have a short coat and groom themselves.

Why do Basenjis yodel?
A Basenji yodels because they have a narrow voice box (larynx) that limits the movement of the dog’s vocal cords. This changes the sound that the dog makes into a yodel.

Are Basenjis aggressive?
A well socialized and trained Basenji should not be aggressive to their family members and other pets.

How much money is a Basenji?
Basenji price depends on where you are getting the puppy form. Basenji puppy for sale from breeders cost about $1,000 while dogs from an adoption center are much cheaper.

Are Basenjis cuddly?
The dogs are very affectionate with their family and love to follow people around. Most like to cuddle but some do not.

Is a Basenji a good family dog?
Basenjis can be independent and even aloof. But when trained and treated well the dogs are great with kids and the whole family. They should be well socialized while young to make them a great family dog.

Can a Basenji mix bark?
Whether a Basenji mix can bark depends on the genetic makeup of each puppy. The puppies that inherit more genes from their Basenji parents are unlikely to be able to bark.

Are Basenjis Friendly?
Basenjis are hunting dogs that hunt in packs. This is why they love human companionship. But they are independent and sometimes aloof. However, they are good with familiar people and other dogs. Basenji are hypoallergenic and friendly with their family but they don’t like strangers.

The dog breed has a short fine coat that doesn’t shed much. In addition, the Basenji love being outdoors and will therefore leave little hair and dander inside the house.

Purebred Basenji dogs love to groom themselves and therefore rarely need bathing. The non-shedding dogs need moderate exercises such as walking at a dog park and running.