Cats and breeds of dogs that don't cause allergies

There are no 100% allergy free cats. Hypoallergenic cat breeds are cats that don’t shed much. Many people who have allergies tend to be allergic to both cats and dogs. The percentage of people who are allergic to cats is twice that of those who have dog allergies (dust mites are the leading cause of allergies in the West, followed by cats).

Cat allergies are actually caused by the Fel d 1 protein in the saliva, dead skin (dander) and urine of cats. All cats produce this protein. The difference is that cats that don’t shed much tend to produce less of it. In addition, male cats produce more of this allergy causing protein.

A hypoallergenic tabby cat. Note the “M” on its forehead and stripes on the body, including the legs.

The Sphynx is a rare (and expensive) cat breed that is of medium size. Hairless cats have been around for centuries. A naturally occurring gene mutation causes the hairlessness in some cats.

However, the Sphynx is a result of selective breeding. The current Sphynx cats were originally bred in Canada in the 1960s. 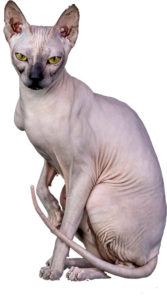 Though their defining characteristic is their apparent hairlessness, Sphynx cats have a very short and fine coat. The Sphynx resembles the cats in ancient Egypt, and hence their name (carvings of Egyptian deities have cat-like heads).

This cat has an oily skin that needs regular bathing. They may get ear infections if the oil secretions in the outer ears are not regularly cleaned.

Sphynx cats lack the natural coats that other cats have. As a result, they may fall ill in cold weather. This is the reason why there are Sphynx cats sweaters (and other Sphynx cats clothes) for sale.

Sphynx cats live indoors but need to go outdoors sometimes. They shouldn’t live outdoors because they have exposed skin. This hypoallergenic cat breed is energetic, mischievous, friendly, highly intelligent and loving. Like most cats, they love human attention. They have a hairless and wrinkled skin and large ears.

The Sphynx cat has no whiskers and no eyelashes. They have deep-set eyes and a muscular body. In addition, these cats that don’t shed much have long and slender legs as well as a long, hard and tapering tail. Sphynx cats come in many colors. These include white, red, black, blue, silver, golden, brown, cream, tortoiseshell and blue-cream. 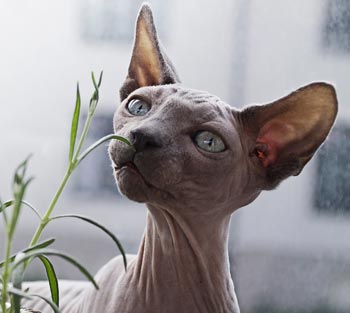 This hypoallergenic cat breed originated in Russia. It was created in 1994 by a Russian felinologist called Olga S Mironova in St Petersburg (hence its name). The cat has a hair losing gene. Some are born bald, or with a straight coat.

A Peterbald cat comes in many colors. This hypoallergenic cat lives for 12 to 15 years. It is one of the most popular and expensive cat breeds in England, with the cheapest cat selling for about $1000.

The Peterbald and the Sphynx cat are similar in appearance and temperament. Sphynx are smaller in size while the Peterbald cat has a long and lean body. The Peterbald has whiskers and long, narrower ears than those of the Sphynx.

They are, however, very different genetically. The gene responsible for the hair loss in the Sphynx is recessive while that of Peterbald is dominant. This is important when cross-breeding with other cat breeds. The cat breed is an indoors cat and needs as much care as the Sphynx. 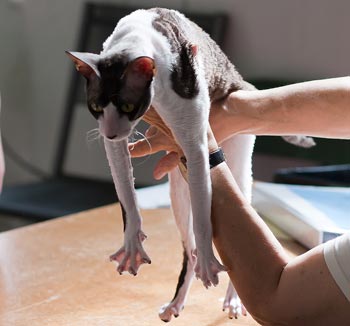 Cornish Rex is a cat breed that has a very short, wavy (yet very soft) and fine undercoat of hair.

Though these cats don’t shed a lot of fur, they tend to lose hair. As a result, some Cornish Rex cats have bald spots all over their long and slender bodies.

This cat breed has an egg-shaped head that has large ears and big eyes. The allergy free cat has its origins in Cornwall (England).

They are very sturdy, intelligent, and playful. The cat loves attention from humans. This makes the Cornish Rex a great family cat. It requires little grooming. The cat breed is a result of a genetic mutation that happened in 1950 on a farm in Cornwall.

A Cornish Rex has some of the traits of the Siamese, Burmese and British Shorthair cats which were used to broaden its genetic base. 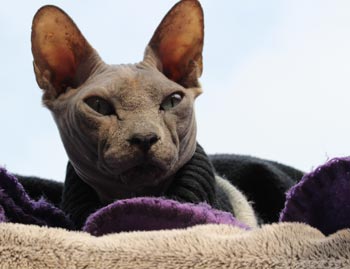 This is another hairless cat breed that has its origins in Russia. The Donskoy is also called Don Sphynx or the Russian Hairless. This cat is muscular and medium sized.

The Donskoy has wrinkled skin, large ears and little or no hair due to a dominant hair losing gene. Their toes are slim, long and webbed. The life expectancy of a Don Sphynx is 12 to 15 years.

This highly intelligent cat breed was discovered in 1987 in Rostov-on-Don, Russia. They are very loyal and love to fetch as well as play hide and seek. In addition, Donskoy cats need a lot of attention. They are indoors cats. You should bathe the cat at least once per month and regularly clean the ears to prevent infection. 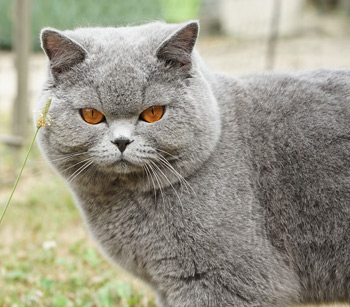 A British Shorthair cat, like other hypoallergenic cats, produces little of the proteins that cause cat allergies.

The cat has a dense coat that is mostly blue-gray in color. Their other name “British Blue” is a reference to this hair color.

However, the hypoallergenic British Shorthair cat comes in several other colors too. These include white, chocolate, black and lilac.

There are also British Shorthair cats that have a tubby coat – and more than one color. A British Shorthair cat reaches maturity after about 3 years. Their eyes can be British Blue, copper, gold as well as blue. This hypoallergenic cat breed has a long lifespan of between 14 and 20 years. 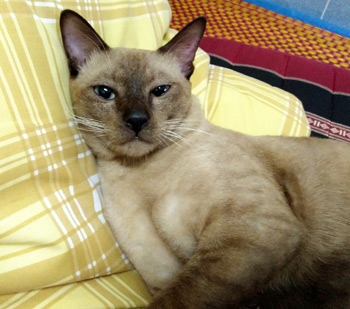 The Javanese cat has hair that is medium in length. It has a single coat of hair that is silky, lies near the skin and doesn’t shed a lot. Its face and extremities are usually darker than the body.

A Javanese can be dark brown, almost white, bluish or even have a tabby coat. Moreover Javanese cats are very vocal and intelligent. However, this cat is easy to groom. All it needs is weekly brushing and occasional baths.

A purebred Javanese can cost up to $900. The cat is sometimes referred to as Colorpoint Longhair and has its origins in North America.

This cat is commonly mixed with Balinese, Siamese and Colorpoint Shorthair cats. These allergy free cats have an average lifespan of 14 years. As is the norm with domestic cats, female cats live longer than male cats. 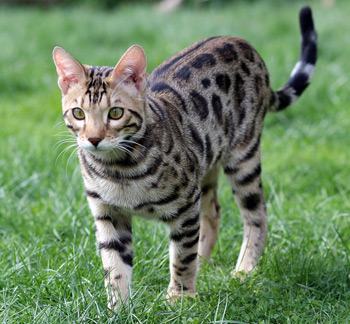 The Mau is a rare domestic cat breed that has spots on its coat. An Asian leopard cat has black spots on its yellow or silver-grey fur. These spots may are sometimes rose shaped.

This is why the hypoallergenic Bengal cat has a golden glow on its coat and an appearance of a leopard.

Bengal kittens usually cost more than the adults, with an average price of about $1,000 (they can cost up to $25,000). They are highly intelligent and make good pets. Bengal cats are very social and easily get bored and lonely when left alone. 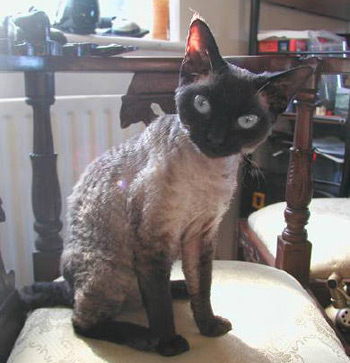 Devon Rex are a hypoallergenic cat breed that has their origin in Devonshire, England.

The cat is intelligent and has large, if not oversize, ears. It has short hair on its wavy coat. The Devon Rex cat has a slender muscular body, oddly shaped head and a long skinny neck.

It is very loyal and capable of learning difficult tasks.

They love human companions – be prepared to be accompanied by your Devon Rex cat wherever you go! As a result, you should avoid leaving the cat alone.

The cat breed is playful and very good with kids – as well as other pets including dogs, other cats and even rabbits. Devon Rex cats do shed. But people with cat allergies have little reaction to this cat. Remember that no cat or dog is 100% hypoallergenic. The large protruding ears are the defining characteristic of this cat breed. 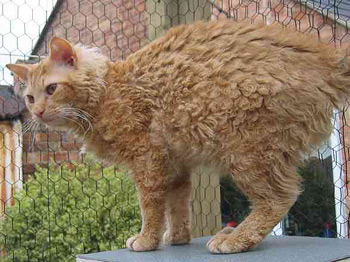 LaPerm cats are loving and physically active. They are gentle and won’t mind being held on your lap. A LaPerm cat has a curly coat (sometimes wavy), almost like that of the non-shedding poodle.

The “Perm” in their name comes from this curly, wavy or rippled coat. 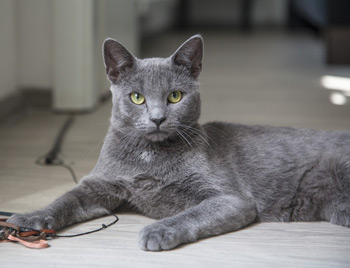 This cat has its origins in the European Russia region, hence its name. Their coat is silver-bluish in color, sometimes blue-grey.

Russian Blue kittens have blue or yellow eyes. However, the adult Russian Blue cat has a bright and vivid green eye color which starts developing when they are about 4 months old. A Russian Blue hypoallergenic cat has a double coat – two layers of fur.

The coat is short and thick. This cat has a muscular body and a long neck. In addition, this intelligent and playful cat has a distinctive mouth – and seems to be smiling at times.

The Russian Blue cat has a big appetite for food and a lifespan of 15 to 20 years. 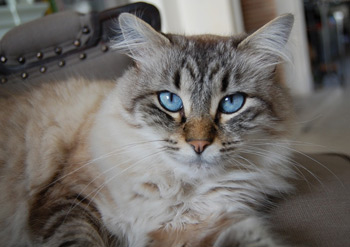 The Siberian cat originated from Northern Russia. This affectionate, playful and allergy free cat has a moderately long, thick coat. It is a good jumper.

The coat is long but easy to groom (once or twice per week) since it doesn’t mat easily.

This cat breed produces little allergenic protein in its saliva. This is why the Siberian cat is categorized among hypoallergenic cats.

They are friendly cats and get well with other pets, including dogs.

In addition, the Siberian cat is talkative. They love their human family.

Their eyes come in all colors. The Siberian cat’s coat can be of any color and pattern. Siberian cats have a bushy tail and a lifespan of 10 to 18 years. Its body size is between medium and large – it is one of the largest cat breed with the adult male weighing up to 25 pounds.