This dog breed has selected characteristics that would aid him during hunting. The Jack Russell Terrier was bred to be courageous and energetic to flush out animals from the woods, particularly foxes.

Like any other working dog, this dogs tend to have an athletic construct and endless energy. Jack Russell Terriers are highly intelligent, but also obstinate and tenacious. This can make them extremely challenging to train without consistency.

As a hunting and working dog, Jack Russell Terriers do have the chasing instinct in them. They have been known to present danger to smaller household pets. However, this does not mean that they cannot be excellent family dogs. J

Russell Terriers usually get along very good with children and are gentle with them if they understand how to handle dogs. The dog breed has a lifespan of 15 years or more.

The dog breed grows to an average of 10 to 12 inches in height and 14 to 18 pounds in weight. Jack Russell Terriers have a number of different types of coats of the short-haired version (some are smooth, some are not) but all are easy to maintain with occasional grooming. This is not a hypoallergenic dog breed since Terriers tend to shed a lot of hair.

Is the Jack Russell Terrier Hypoallergenic? 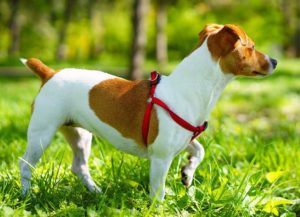 Jack Russell Terriers are perfect for all kinds of lifestyle. However, they do require regular exercise, at least once a day. This is as a result of their apparently endless energy.

Without regular to exercise and activities, they will easily become bored, and it’s just the perfect way to make him become destructive.

If a Jack Russell Terrier must be left alone for a longer period of time without the opportunity to go out, it is recommended that they be crated until it is possible to let them exercise.

Like Chihuahuas and the shedding Shiba Inu, Jack Russell terriers are fearless. They will sometimes run off without thinking because of their hunting instincts. A fenced area is a must for this breed, but the fence needs to be deep enough as they are excellent diggers. The fence should be tall enough to prevent them from jumping over. An average sized Jack Russell Terrier is able to jump five feet fairly easily.

There are some health issues with this dog breed. Some Jack Russell Terriers are prone to dislocation of the kneecaps, inherited eye diseases, deafness, Legg Perthes – a disease of the hip joints, and cataracts. At the moment, there is some argument about the breed and breed standards.