Dogs come in all shapes and sizes, from the tiny shedding Chihuahua and West Highland White Terrier (Westie) to the giant dog breeds such as the Afghan Hound and Akita Inu. Small dogs are usually great companion dogs.

In contrast, most of the big dog breeds are outdoor dogs that love hunting and guarding duties. Large dogs are, in addition, eye catching.

Are you looking for a large white dog breed that thrives outdoor? How about the Dogo Argentino. This friendly yet brave dog is large and very muscular. Dogo Argentino dogs were originally bred to hunt big game, especially wild boar.

Dogo Argentino are among the most badass dog breeds. A pack of this large white dog breed can chase down a mountain lion (also called cougar, puma or panther)! The dog is protective of its human friends – a must have quality in the wild. Dogo Argentino have a short coat of fur that barely sheds. But they aren’t regarded as hypoallergenic.

Dogo Argentino is one of the large white dog breeds

Pure bred Dogo Argentino are pure white in color. The adult male weighs up to 45 kg. They have a height of between 60 and 68 cm.

This large white dog breed originated from the regions around Afghanistan, Iran and Pakistan. Afghan Hound can be white, black, cream, red, brindle, blue as well as a mix of several colors. This non-shedding dog breed has a thick but silky coat well adapted to cold temperatures.

The male dog weighs up to 35kg. They are smart but independent and aloof! This excellent guard dog has a life span of 12 to 14 years. 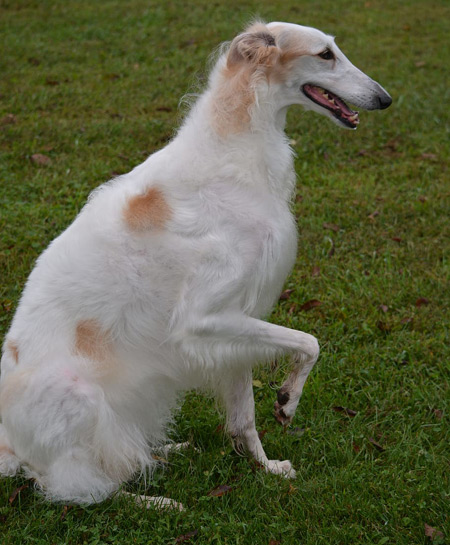 This Russian dog loves to chase other smaller pets. The dog breed belongs to the sighthound family – hunting primarily by sight and speed.

Your cat will get enough exercise courtesy of your Borzoi!

This dog is large, strong and graceful. Borzoi are good guard dogs. They are gentle despite their strength and size. They are, however, not the best pet for very small children.

The dog breed is not hypoallergenic. Russian Wolfhounds also come in red, fawn, brindle, cream and black coat colors. An adult male Borzoi can weigh more than 45 kg and be taller than 75 cm at the shoulder.

The Komondor is one of the large white dog breeds. Its coat resembles a cleaning mop! This dog was originally bred in Hungary to guard livestock. It is an excellent watchdog with a life expectancy of around 12 years.

Komondors are large and brave, yet gentle with the people they are used to. An adult male can weigh more than 60 kg and stand at over 70 cm at the shoulders. 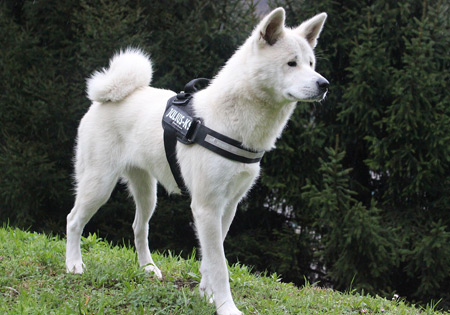 Akita and Shiba Inu are popular Japanese dog breeds. The Akita is a large dog breed. Unlike the Shiba dog, Akita dog is tall and heavy.

Most Akita Inu have a red coat. The bold dog is adapted to outdoor living. This is because Akita Inu were bred to assist in hunting game on the mountains of northern Japan.

But the shedding dog also comes in white, brindle and fawn colors. There are Akita Inu that have a coat made up of patches of white and the other colors.

The dog is protective, independent and lives up to 15 years. An adult Akita Inu can weigh as much as 40 kg and be as tall as 71 cm at the shoulders.

This large white dog is also called the Pyrenean Mountain Dog. It has its origins in the regions occupied by France and Spain. The dog is a good guardian dog for livestock. They are big but calm, protective yet gentle.

Great Pyrenees dogs can be aggressive if not well trained. The dog also comes in tan, red and grey coat colors. An adult male can weigh over 55 kg and be over 80 cm at the shoulders! 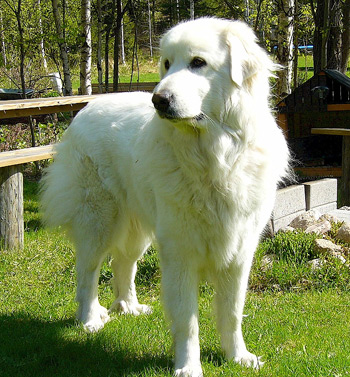 This large white dog breed is also from Spain. It comes from the region around the Aragonese Pyrenees mountain range. This is between Spain and France. It is an ancient dog breed.

Pyrenean Mastiff dogs were bred to guard livestock against attacks by mountain wolves and bears. It is gentle, independent and loving. The Pyrenean Mastiff is a great watchdog. An adult male is over 75 cm tall and weighs more than 80 kg.

Pyrenean Mastiff are also available in other colors that include red, brindle, black, shades of gray and sand.

This large white dog breed is a sighthound that was originally bred in Ireland. The dog has a keen eyesight and can run at a good speed. The Irish Wolfhound is a great guardian dog. It was bred to protect livestock against attacks by wolves.

The other colors of the Irish Wolfhound are red, black, brindle fawn and grey. An adult male can weigh over 80 kg and be as tall as 90 cm. This dog breed is not hypoallergenic.

The German-bred Great Dane is renowned for its great size. A Great Dane who was called Zeus holds the world record for the tallest dog ever! Despite their great size, Great Danes are gentle and loving. They are confident and devoted dogs.

The White Great Dane owe their white color to a dominant gene. But the white dogs of this breed tend to have ear and eye problems. 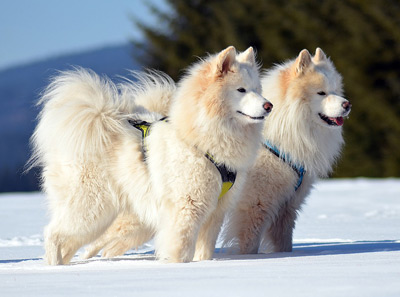 This large white dog has his origins in Siberia (Northern Asia), among the Samoyedic people. The dog has a thick, double coat that protects him from the harsh weather of Siberia. The Samoyed dog thrives in cold weather.

This large hypoallergenic dog breed was bred to assist in herding livestock and to pull sledges. Samoyed have a lot of strength and endurance – common traits among sledge dogs. An adult male Samoyed weighs up to 30kg and can be taller than 60 cm at the shoulders.

This breed is also known as the Ukrainian Shepherd Dog/ South Russian Sheepdog. The dog was bred to assist in herding sheep. This dog is strong and muscular. It has a thick and dense coat that is most commonly white.