Russian Blue hypoallergenic cats produce less Fel d 1 than the allergy causing cats. The cat has a bluish grey coat that has a silver-like radiance. It is one of the hypoallergenic cats (low allergy) that cause less allergic reactions to people. The cat breed has its origins in Russia, in the Arkhangelsk/ Archangelsk city (also called “Archangel” in English). Traditionally it was known as the Archangel Cat”.

British and European sailors took the hypoallergenic cat breed to Europe in the 1860s. This is a medium to large cat. The male Russian Blue weighs between 10 and 12 pounds with the females weighing less by about 3 pounds on average.

It has a short, straight and dense double coat that stands out from its body. The Russian Blue cat has long slim legs. The adult cat’s eyes are of a vivid emerald green color – and almond shaped.

This energetic and quiet cat has little grooming needs. Well, cats are one of the most popular household pets. In addition, they cause more allergies than dogs. Like other cats, Russian Blue hypoallergenic cats produce Fel d 1 in their salivary and sebaceous glands. Cats also produce a lipocalin allergen called Fel d 4 (Fel d 1 is a protein). The allergens are mostly found in skin, hair and saliva.

Male cats produce more allergens than female cats. As a result, you can further reduce the chances of your Russian Blue cat causing allergies by getting a female cat. Most Russian Blue cats have a blue coat. But there are some Russian Blue Siamese mixed cats who have a black or white coat. 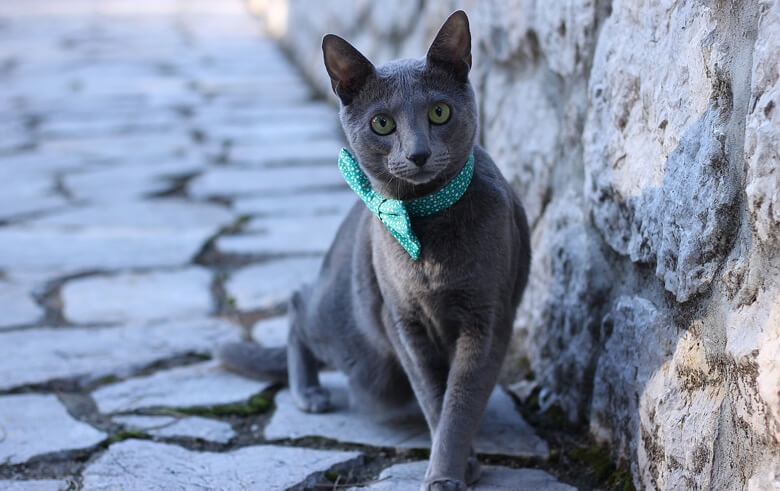 Russian Blue cats are quiet yet playful, affectionate and friendly to their human family. They live gently and comfortably with other pets. A Russian Blue cat is also easy to train – and love pouncing on objects and playing fetch. However, these cats can be reserved in the presence of strangers. The cat has a slight curve on the corners of its mouth. This makes it seem to be smiling at times.

Purebred Russian Blue kittens are born with yellow eyes. The kitten’s yellow eyes develop a bright green ring that encircles the pupil at around 4 months. The eyes will gradually become greener as the cat matures.

The average Russian Blue cat price is between 400 to 600 dollars. A Russian Blue cost also depends on age and the breeder. Ethical breeders produce the best pedigree cats that will cost a little more. Cats obtained from kitten mills and backyard cat breeders may be cheaper but lack the quality guarantee of an ethical breeder.

It is best to get a Russian Blue cat from an ethical breeder. Russian Blue cat breeders who follow the voluntary code of ethics that are encouraged by the International Cat Association, Inc. (TICA) can be found on the TICA website.

Over 700,000 pets in U.S. shelters are killed annually. You can help save a life simply by adopting a Russian Blue cat. There are healthy cats in adoption centers and rescue groups who only need a home and a loving family. Another great place to find a Russian Blue is Adopt a Pet. Pet Finder also has thousands of pets, including Russian Blues, that are awaiting adoption.

Russian Blues love human company. Your cat will enjoy following you around. Russian Blue hypoallergenic cats are also great choice if you or a family member suffers from cat allergies.