Shiba Inu (Inu is Japanese for “dog”) and Akita Inu are popular fox-like dog breeds that originated from Japan. It is the most popular dog breed in Japan. They were originally bred to hunt small game and wild boar. They are now a popular dog breed in the U.S and Europe where they are kept as pets. However, Shiba Inu shedding is a concern for some people. This is because Shiba Inus are not hypoallergenic.

Shiba dogs are fluffy. This is because they have a dense double coat. Dogs who have a double coat usually shed heavily when the season changes – in fall and spring. As a result, Shiba Inus shed heavily twice in a year. This process is commonly referred to as a “blow out” since the dog sheds its light undercoat.

It is recommended that you groom/ brush them several times in a week during this period. A soft de-shedding brush is a handy tool for any Shiba Inu owner. But care should be taken to avoid hurting the dog. Shiba Inu dogs need regular grooming, not just when they are shedding heavily.

Some Shibas have longer hair than others, and therefore the dog’s grooming needs may vary. You should brush them at least twice per month during the period when they aren’t shedding heavily. This will help reduce the presence of dog hair in your house.

Regular bathing has been proven to help reduce the amount of shedding. Shiba dogs are known to be aggressive at times.

As a result, it’s best to start bathing your Shiba when it’s still a puppy. This will ensure the adult dog is used to regular baths. But remember to avoid excessive bathing that can lead to skin problems – twice a month is enough. 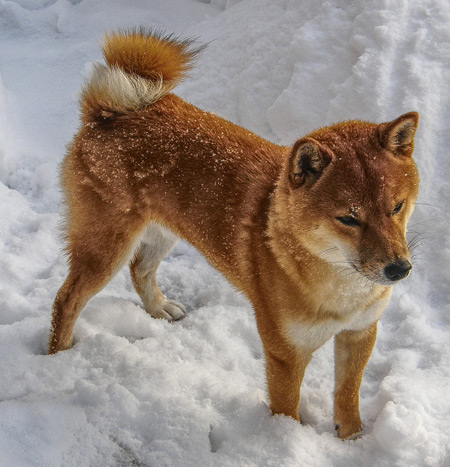 A Shiba Inu has a dense double coat. This is why they regularly shed.

All huskies shed. They have a double coat to shield them from extreme temperatures. As a result, a Shiba Inu husky mix will still not be hypoallergenic. The bigger Siberian husky is cross-bred with a Shiba to create the Shiba Inu Husky mix. The resulting dog is bigger than a pure-bred Shiba Inu. It is called a Husky Inu.

Some dog breeders will mix a Shiba with the hypoallergenic Cairn terrier. Just as with the Goldendoodle, the resulting dog may shed less. This depends with its genetic composition – a more terrier like offspring will not shed a lot.

Another way to obtain a less-shedding Shiba is to mix it with a Poodle. The offspring is called a Poo-Shi. It may be hypoallergenic. A Schnu is a cross between a Shiba Inu and the hypoallergenic Miniature Schnauzer.