Shiba Inu is the most famous Japanese dog breed. Inu is the Japanese word for “dog”. Shiba dogs are a popular wolf-like dog breed. And they shed – a lot. Their most common coat color is red. But there are black Shiba Inu as well. Other Shiba dog colors are white/ cream, tan and the rare sesame.

They are small to medium sized dogs. But there are mini Shiba Inu too. Mini Shibas are smaller versions who have bred with the sole intention to have smaller Shibas. The Shiba dog is the most popular dog breed in Japan.

The original Shiba dog was bred for hunting birds and small animals. These included waterfowl (ducks, geese and swans) and rabbits. Packs of Shiba dogs were occasionally used to hunt bigger game such as the Inoshishi – Japanese wild boar. The Shiba is a clean and energetic dog breed. 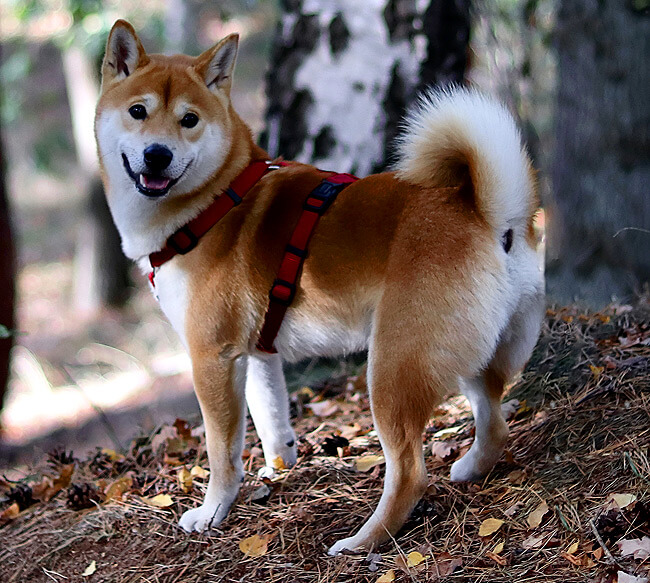 Here are 10+ top facts about the most famous Japanese dog breed.

A Shiba dog’s temperament can be described in three words: alert, brave, good-natured. They are gentle despite their hunting genes. Shiba dogs are, however, very possessive. Some of this breed can even guard their “possessions” aggressively – especially when children and other pets are present.

Urajiro markings on a Shiba dog

The Shiba dog is small in size but well-muscled. It is agile and quick, like most hunting dogs. A male Shiba weighs about 23 pounds while the female is smaller at about 16 pounds.

The dog breed has a lifespan of 13 to 16 years. Adult male Shiba dogs can weigh as much as 25 pounds. The preferred Shiba Inu colors are red, black and tan.

A purebred Shiba dog should have “Urajiro” – the white/ cream color on the dog’s throat and tummy, under the jaw, inside the ears, on the sides of the muzzle, cheeks and on the underside of the tail.

But urajiro may be hard to notice on a white Shiba Inu. A Shiba can live indoors comfortably as well as outdoors. They make good companion and guard dogs.

Shiba Inu for Sale – Where to Buy a Shiba Dog

The National Shiba Club of America (NSCA) is the national organization for Shiba dogs in the U.S. It has a huge Shiba Inu breeder directory. You can get good Shiba Inu puppies from the breeders on the American kennel Club website. One can also adopt a dog from the many Shiba dog rescues that include Shiba Inu Rescue Association (SIRA), the New England Shiba Rescue and Midwest Shiba Inu Rescue (MSIR).